Tore up our severely worn out deck this fall and re-did it with Trex composite. Shopped around and Lowes with a pro account and bidding the job through their bid room came out the best deal on the supplies. Kept the footprint the same (12x12 main deck, 9x6 landing) but changed the joists from 24 “ish” on center to 12" on center. Trex supports a 16" on center but everything I read on contractor forums said if you want your Trex deck to feel as solid as a traditional lumber deck go with 12. Picture framed the edge boards to hide ugly unfinished edge (vs running fascia pieces over the edge which I find looks shitty). Went with the Trex rail system as well and love the look of the white post/rails with black aluminum balusters. Used the Fastenmaster Versaclip hidden fastener system and I was happy with it (other than being a little slow to use), though it looks like it’s being discontinued. Was going to use the Camo system but my pro rep said they had a couple contractors complain about issues with it while they had no complaints on the Versaclip.

Old deck, in really bad shape because the last few years we knew we were going to replace it with composite so we weren’t maintaining it at all. Notice the horribly against code rail setup the original owner went with for the stairs. 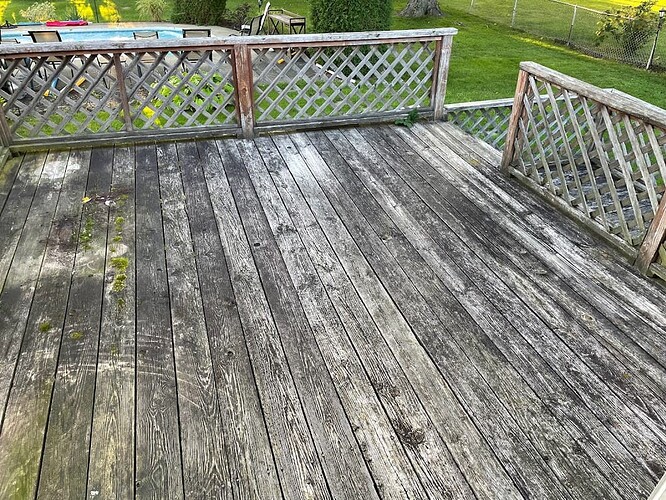 New deck. Trex Foggy Wharf from their Trex Enhance line. Paid a little more for this over the Trex Select clamshell gray because 1, we liked the color more with it’s variations and veining, and 2, it was a considerably lighter color and we’ve seen some horror stories about how hot the darker composite decking gets in the sun. 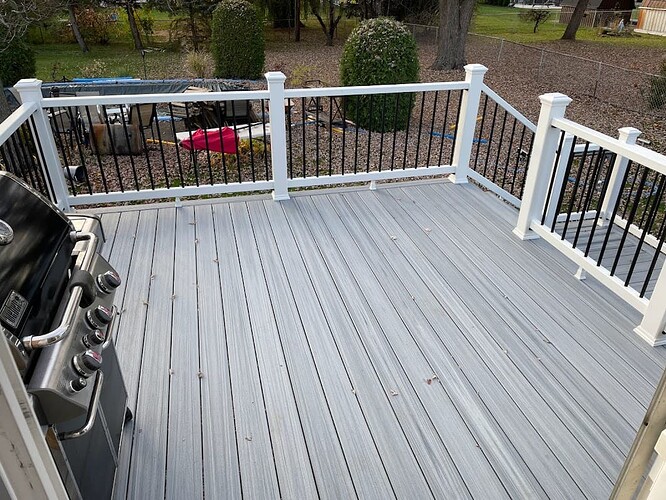 that looks insanely better, coupled with your kitchen, yall set for a while lol

Wow that old one was one drunken stumble to disaster by that step! How high is that main deck? That came out much nicer and more modern looking, I love the look of the composite.

How high is that main deck?

A little more than 5’. It’s a raised ranch so it comes out even with the main floor of the house. Definitely some sketchiness with the old rail setup. Plus the rail was so low even on the main deck it was more designed to trip you over the edge than stop you from going over the edge.

If you have to ask…

If you have to ask…

i have to ask because im useless with my hands and i have to pay for everything… so it would be good to know.

Labor $0, did it all myself with some help from a friend down the street. About $5500 in supplies. Trex ain’t cheap and that Trex rail is even worse.

oh word. sorry i thought you had someone else build it.

that Trex rail is even worse

How is Trex to work with? Easier / same as wood?

How is Trex to work with? Easier / same as wood?

It’s not bad. You have to account for thermal expansion/contraction more. Use pretty fine tooth saw blades and it cuts fine. Bracing wise you need a lot more than wood because a trex plank has a lot more bounce than a 2x6 piece of lumber which is why I went 12" on center. Being an engineered product I expected every piece to be straight edge straight like when you work with engineered beams but that was definitely not the case. Getting that first piece in perfectly straight was key, then for the next 3-4 use clamps to clamp against that piece. Once you get too far for your clamps to reach just screw a scrap 2x4 across your joists and switch the clamps to push instead of clamp, and then just push off the 2x4 to force each new row of trex up against the pieces you have down already. No way I would have been able to hold them flush by hand and get the clips driven in properly.

The railing system is pretty slick. A first I didn’t like that the post sleeves had quite a bit of play over the 4x4 posts but as I started building I realized that helped a lot for anything that wasn’t 100% perfectly square. Definitely take your time picking out your 4x4’s and make sure they’re as straight as possible without any twist. Some of my posts we re-used from the old deck and shimming them to get the sleeves nice was a bitch. My neighbor came up with this idea that worked great for shimming the tops of the of posts. Cut a piece of scrap 2x6 down so it was a tight fit inside the post, then use that to adjust the post on the 4x4 and drive a couple screws down through it. If it was peak heat of summer I don’t think I’d do that (since the sleeves would be at max thermal expansion and it could get ugly with a snug piece of wood in there when they started shrinking) but by the time I got to installing the rail it was pretty cool out and my sleeves were not sitting out in the sun or anything. 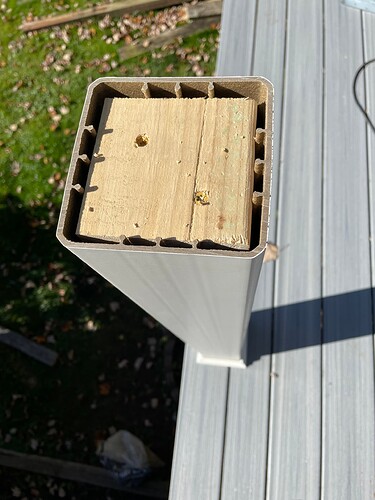 Once you drove the screws for the rail system through the rail brackets, through the post sleeve and into the posts the play was gone anyway, but it was good to make sure everything was square first. The stair rails were a little tricky just getting the angles cut right but you’d have the same issue with wood there.

That’s a great idea to anchor the tops of the posts to get everything square!

How is Trex to work with? Easier / same as wood

I’ve installed many different brands / variations of decking and railings. Having a clear understanding of the materials, install methods, and a game plan are key. Mistakes are costly. Shit aint cheap.