I know we have one of these threads but it’s old and most of the people in it aren’t even on here anymore. We’ve been going out to various wing places basically since covid started with a couple of our neighbors, hitting all the top spots. My top 3 right now are:

We’ve hit, not in any rank order:
Gabriel’s Gate
Wingnutz
Doc Sullivans
Gene McCarthys
Paddock Golf Dome
Glen Park Tavern
Libation Station (this one made the cut because we can walk there)
Elmos (man that double dipped cajun is good)
Audubon North
Andiamo Bistro
And probably several that I’ve forgotten

On our list still:
The original Anchor Bar on Main
Kelly’s Corner
Mammosers

Love barbill for selection, duffs for crispy and hot.

I went to SBAG for wings twice. First time their hot was not hot at all. Second time I mentioned this to the server, who obviously said something to the cook, because the 2nd time they were so hot my one buddy had one and was done. I loved them but man they were HOT. That was a different crew though so we’ll have hit that one with this neighbor crew.

Bar Bill is still our go to.
When you order from the new location, you have to actually tell them crispy and saucy.
They are not the same.

We also buy the jars of sauce and fresh wings from Niagara County Produce and DIY it.

I can eat duffs, but as we already DIY wings, we can DIY franks red hot and butter all day like they do.

I also eat BWW. They are usually fine and the same nation wide.
(BOGO on Tuesdays used to get me 2 beers, 20 wings and fries under my work receipt requirement)

Sbag = Snyder Bar And Grill
Duffs Super Hot is more than just Franks. Still not as good as Barbill hot though.

And what ever those white flecks are on nine-eleven wings, probably crack, is amazing.

Most controversial - Favorite Medium Wing - Wegmans. It’s more so the Danny’s Fav Medium Wing Sauce I like, not the wing itself.

Worst wings I’ve ever had - Gabriel’s Gate. Granted, their fryer went down so I don’t know how they made them, I’m willing to give them another chance but I haven’t been back after eating one and leaving the rest on the plate.

Regular Wings - Could be from anywhere.
Hot Wings - Not a fan of spicy.

A couple times a year my friends and I will do a “wing feast” - We’ll order 5 different wings from 5 different places.

I’ve never found a place that has all my favorite wings in one spot, it used to be La Pizzeria cause the Cajun wings were outta control, but the owner left Buffalo, and whoever took over doesn’t do nearly as good of a job.

Bar Bill’s cajun is great. So is their spicy asian. Sometimes I’ll do a split of hot and spicy asian or hot and cajun. Duff’s dry cajun is also great, but I’m not of fan of their new saucy cajun.

Was not impressed with Gabriels Gate either, and their fryers were working when we went. Their BBQ were comically covered in sauce (like floating in a bucket of it) and their hot was just plain old franks.

I did learn that Nine-Eleven only has one mixture for their wing sauce. If you want it milder it’s just more butter, and hotter is just more cayenne pepper. Last time we were there we got a jar to bring home and the waitress let me know that was how to adjust it to your spice preference.

Imperial has a great Garlic Parm wing, one of our favorite spots to hit for a half pizza and 20 wings.

My go to wing is Bar Bill spicey BBQ.
I believe they use sweet baby rays as a base though, so we may try experimenting at home.

We tried their Cajun honey butter BBQ, but we are not fans.
We stick to what we like because we have been going there since the old school BOGO Tuesdays back in the late 90s.

also. If any of you have a chance to go to a Roosters somewhere in the US, DO NOT ORDER WINGS.

You get the entire wing, and its got breading and some terrible sauce on it.
Just looking for this picture made me not hungry. 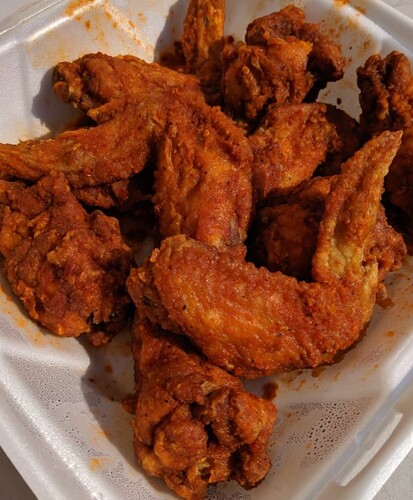 My buddy and I started going to Duff’s (Orchard Park) every other Friday for going on 7 years now. Weve only missed maybe 3 rotations. Even during the scamdemic we ordered takout. We’ve tried every flavor in a few months. Settled on hot BBQ. We do the special with fries and beer and get an extra 5 hot and 5 sweet char BBQ. 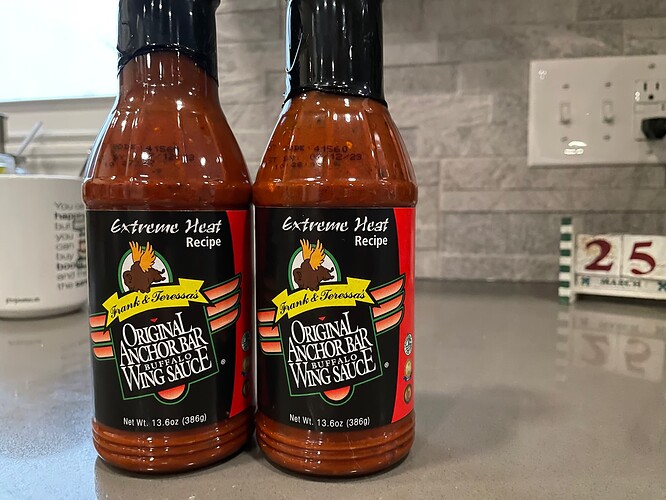 Anchor Bar (original location) moved up to 3rd thanks to this sauce, that I had to bring 2 bottles home with me. Wife had mild, Brian medium and Heather spicy garlic parm, all were excellent.

Didn’t see it on the list but Sawyer Creek on the corner of Nash and Blvd has some awesome wings.

My favorite so far on size and flavor would be Wingnutz with the wingnutz Mild or Medium. I’m not big on heat and usually keep it to the traditional flavor of Hot, Medium, Mild. But man do they cook a good wing and a good size one at that.

Random, but my new favorite “pizza place” wing is from Cappola’s, in Bemus Point. Their medium sauce is almost identical to 911 tavern. We were all so shocked by how good they were that we ordered two nights in a row.

My buddy and I started going to Duff’s (Orchard Park) every other Friday for going on 7 years now. Weve only missed maybe 3 rotations. Even during the scamdemic we ordered takout. We’ve tried every flavor in a few months. Settled on hot BBQ. We do the special with fries and beer and get an extra 5 hot and 5 sweet char BBQ.

My supposed “buddy” went Black Ops dark on me about 3 weeks ago. Reached out to him to remind about wing night. Never got a response, even after multiple attempts. Starting to Jones for my hot BBQ wings.

im down for a nyspeed wing night

Fresh wings are relatively cheap at Niagara produce these days.

My wife likes to make a bunch of them and we use BarBill sauces, BWW, and others.
Cost effective and awesome.

You can get a lot of wings out of one $10 jar of BarBill sauce. Their grocery store bought sauce did not taste the same to me.

Also, mix their hot with some sweet baby rays for a decent spicy BBQ.