But that’s where the SIQQQEST pow pow is!!

Reputable sources speculating that Schumi may be in a coma for the rest of his life. Fears grow that Michael Schumacher will be in coma 'forever'

German weekly news magazine Focus reported that 'Schumacher could be in a coma forever' after speaking with experts on his condition.

You dont think they are being tight lipped because they dont want the media hounding the hospital or doctors on staff for information.

Sometimes no news is good news.

prospects for recovery are getting gloomier: 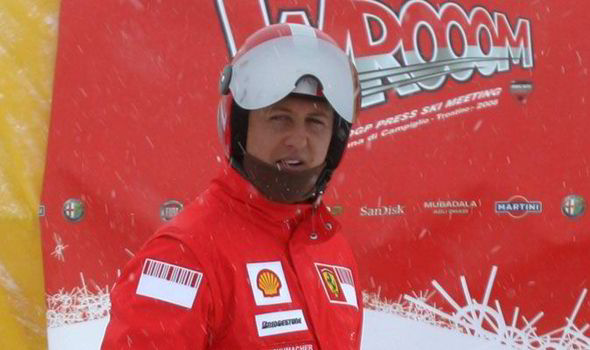 Racing driver Michael Schumacher ‘has spent too long in coma and is unlikely to...

MICHAEL Schumacher’s family offered their heartfelt thanks to fans on his website yesterday as fears grew for his recovery from head injuries.

As fears grow that Schumacher could be left in a permanent vegetative state, Massa said "When I drove a kart your name was on my helmet - now I want to see you more than ever before"

I doesn’t sound good but it’s a bit of sensationalism by the news to be interviewing doctors who haven’t even seen him so they can toss out terms like apallic syndrome.

It is too early to diagnose Michael Schumacher as being in a permanent...

Consultant Neurosurgeon Colin Shieff says, however, that it is correct for doctors to warn the F1 legend's family of potential Apallic Syndrome

I doesn’t sound good but it’s a bit of sensationalism by the news to be interviewing doctors who haven’t even seen him so they can toss out terms like apallic syndrome.

No doubt, but it’s also true that no news is bad news at this point. So sad.

Michael Schumacher was thrown 34 FEET when he hit rock and then smashed head on... What a shame. Creates a legacy risking life every time he sat in that seat and it concludes with something like this.

the scary part is that they say he may be fully conscious in there… if that’s the case and he does eventually wake up he’ll be insane.

You can’t blame him. I would go insane stuck in my own mind not being able to speak to anyone.

Sent from my XT907 using Tapatalk 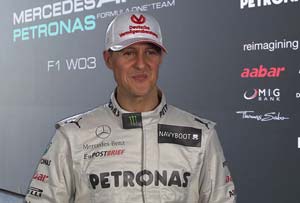 Michael Schumacher, a seven-time Formula One world champion is accused of not respecting right of way at a roundabout, knocking the motorcyclist, Francisco M.A. off his bike and causing him to break his wrist as well as damaging his motorbike.

^ That first article was based on a tweet that was proven fake.

He needs to snap out of it.