I’m buying a car with a 454 lsx in her. The problem is she isnt making the power I know she can. Its a forged rotating assembly in a lsx iron block with 6 bolts per cylinder. It has a mild cam and stage ii or iii patriot 243 gm cast heads. Fast 102 sits up top. A 2800 stall and built auto sit behind. Currently dynos at like 470hp/500tq. Is there a cam that will wake he up? Should I bite the bullet and get some mast heads and a new cam?

I know this engine has an easy 550hp in her how do I get it the easiest way possible? LoL

Sneak peak of the car.

Car number 5 in the fleet lol

Ya thats sounds low. I would think even a stock 243 with a 224 cam would make that, on that many cubes at 6500. Its a new setup to you, so I would check the basics 1st. Check the exhaust for clogged cats, X or Y pipe installed wrong. Seen both, and X and Y section installed 90* off…? so ya, it was connected with the main bend going to both headers :bloated:. The TB opens 100% when you push the pedal down. Look at the air filter lid setup. Do you have the dyno sheet? 470/500 is alot of tq for a low hp, peak hp sounds to be at a low rpm. Cam might be installed off a tooth, it its just sucks and is like that. You have the specs on it, is it some old ass 1999MTi/ HPE turd. 216/222 .540… Scan it and see how it looks, map, maf will tell you how the engine is doing for pumping air, so other stuff too I dont know alot about the tuning. If it down a cly, not happy at a rpm spot?

454 has some bore, 4.1xx you know thouse heads are cast for a 3.89 bore max. Not many patriot heads end up on a motor that size ($$$) You know of they setup for this motor? It sounds like somone had some has some leftover top end parts on it. start with this

The guy I’m buying it from literally knows nothing about it. Compression and leak down are good. I think it is just a really bAd head/cam combo. If I were to keep the heads on it is there a cam that would even work well with them? I wouldnt mind swapping out the cam.

Throw some trick flow 235’s on it and get a decent bumpstick in it. As studderin said what lid/maf setup is on it? most guys with that many cubes are rocking the 104mm if i am not mistaken. i would think with 454 cubes you’d want something in the 240’s cam wise with a decent amount of lift, probably .630-.645 and if it’s staying n/a throw it on a nice neutral LSA like 112 or 114. What kind of valvetrain is that thing running? Springs new or used? Weak springs can make you lose power if the seat pressure isn’t there. I’d def rock a lightweight rocker arm setup as well. 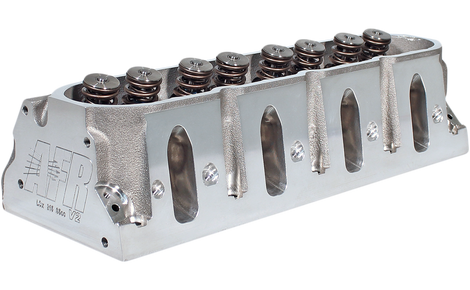 What happened was the guy had a pretty well built ls1 and put a rod through the block. He had the 454 built and the ls1 top end swapped over. He was planning on new heads later but never got to it. He also has a tt viper and galardo lol.

Did you notice how low the front end sits? Those springs don’t like the extra 100lbs on the nose, lol.

LoL it has coil overs, car is odd.

N2O is like boost in a bottle, still a massive increase in cylinder pressure. If you were planning under say 225 hp the 4 bolt would be fine however in the 300-400 hp range look for a 6 bolt casting. The TFS is the bang for the buck in that territory

lol are you building this for TX2K1?

Honestly how is someone able to afford a TT Viper and a Gallardo and they can’t afford to properly finish a a 454 LS build.

lol are you building this for TX2K1?

Honestly how is someone able to afford a TT Viper and a Gallardo and they can’t afford to properly finish a a 454 LS build.

He just stopped caring about it really. I’m just going to drive it as is for Tx2k12 as I’m in cali until this weekend. I don’t have enough time to get this car ready with a new top end by them. I hope to have my 408 TA with its brand new faceplated custom T-56 ready. I’ll drive the 408 WS6 M6 my wife will drive the 454 Firehawk A4 lol.

So you have no idea the specs on the heads and cam?

So you have no idea the specs on the heads and cam?

The heads are 243s that were sent to Patriot, he doesn’t remember if they are stage ii or iii. They are supposed to be 225 runners though. Cam specs are no where to be found. I’ll post up a dyno, should have it tomorrow.

The heads are 243s that were sent to Patriot, he doesn’t remember if they are stage ii or iii. They are supposed to be 225 runners though. Cam specs are no where to be found. I’ll post up a dyno, should have it tomorrow.

Yeah if you change some stuff I think the numbers will improve a lot.

What tranny is in it?

ya on the dyno sheet.

some info on thouse heads, back in they day on some cars I put them on… stock 346s. Sometimes thous heads gain 25-30whp. And a few cars gained 10 or less (zuguta). The port work, fitting, blending, to the head casting and the VJ, The (no) finish work was all over the place. Thous heads are literaly right out the the machine, clean, assembly, into the box as fast as possible. sg2 or 3 was the same junk port, just valve size I think. sg1 was stock valves I know.

But remember SAM went 8’s at 154mph NA with that head, so its not junk. There is a slight change they might be great to use. 550whp with those cubes is easy. But its easy to just sell them, if you want want to use them too. But I dont know what used, old ass patroit heads are worth? I sure as hell wouldn’t spend money to use them. But if the guilds are good (tight stocks), and those dont have the shitty ones they used. You can use them to get 550.
Got any plan, you going to take the heads off and the cam to find out to sell them. And just looking to buy better stuff? Or use the heads.

whats with that trans? I got my gears from liberty

They went out today to get super bling finish